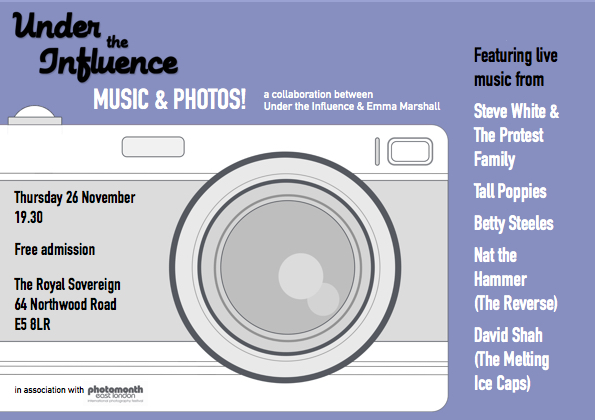 Dreamed up by Nathan Loughran in 2010, Under The Influence started as a brilliant idea for a music night that supported new acts while paying homage to the greats.

Every month there’d be a different theme act and a line up of great new musicians who would play one cover song by that artist, along with a few originals of their own.

Since then, Under The Influence has paid tribute to an impressive range of artists, including Leonard Cohen, Blondie, Prince, Jacques Brel, Tom Waits, Nina Simone, Stevie Wonder and many more.

The night’s still going strong, although it’s no longer monthly; Under The Influence is now also a record label and a podcast, all run with the same ethos of supporting new talent.

Between 2011 and 2014 I took photos regularly at these monthly sessions at the Boogaloo in Highgate, and next week, I’m opening a little exhibition of some of those images.

To launch it there will be a special photography-themed Under The Influence night of live music.

It’s in association with East London Photomonth, and it’s all happening at the Royal Sovereign in Clapton on Thursday 26 Nov.

If you’re in town, come along!