A selection of the people I’ve been privileged to photograph over the last 12 months.

Pam AB, charity worker and mother of my nephew, Hunter

Part of the growing zero waste movement happening in London and beyond, Megan runs Re:Store, a bulk-purchase shop based at Hackney Downs Studios.

Organization for the Development of the Indigenous Maya – ODIM

While visiting Guatemala recently, I had the huge privilege of attending ODIM’s clinics and pre/postnatal home visits in San Juan and San Pablo La Laguna, to gather some images for their annual report.

London’s photographers are a wonderful bunch.  They’ve been generously donating prints of their work to help raise money for a charity that supports some of our most vulnerable children.

Childhood First transforms the lives of kids suffering severe trauma due to abuse and neglect; helping them towards a future where they can be happy and fulfil their potential.

Dozens of fantastic photographers have donated prints, which will be randomly allocated to ticket holders at an evening of comedy and music in Saturday 17th November. All money raised will go to support the charity’s work.

To find out more, check out this feature in the Gazette.

Incredible production at Boomtown Fair. I was blown away by the storytelling and attention to detail. It was genuinely like walking into another world; A post-apocalyptic, big-brother corporation-controlled, fat-cat civilisation on the brink of collapse. In a good way.

Great to see my photo of Claudia Kappenberg’s Slow Races performance on the cover of Performing Process: Sharing Dance and Choreographic Practice, published by University of Chicago Press.

A splashy portrait session with international free diver Nancy Gibson (who also happens to be my awesome home-visiting hairdresser).

A giant globe of light suspended from the trees above a round table. As dusk falls, the globe creates a focal point, bathing the leaves, gravestones and festival-goers in an ethereal glow, visible from deep in the woods.

This was Knight Feast – an installation by Rebecca Sainsot-Reynolds and Katherine Daish, and part of Shuffle Festival, held in Tower Hamlets Cemetery Park on the August bank holiday.

On the table/stage, there were music and theatrical performances by Greg Hall, Lea Collet & Marios Stamatis, Electro Improv Street Performers, Fear of Fluffing and Talulah Haddon & Elijah W. Harris, culminating in a crazy musical space-jam. (Which, unfortunately, was shut down by zealous council enforcers as the decibels were breaching agreed limits).

Shuffle consists of music, bars and cinema screens peppered throughout the overgrown cemetery. It’s a Danny Boyle project and has been running for a few years, but the word hadn’t reached me until now. It was an entertaining, thought-provoking and visually intriguing evening and I’ll definitely be marking Shuffle weekend in my calendar for next year.

I met the grounded, charming and exceptionally talented Namvula in Notting Hill, to make a portrait to accompany a Rhythm Passport interview.

Check out her beautiful album Quiet Revolutions on Bandcamp.

Purdue Convocations, one of the oldest collegiate performing arts promotors in the US, has licensed my image of Daymé Arocena for the cover of their 2017-2018 season brochure. 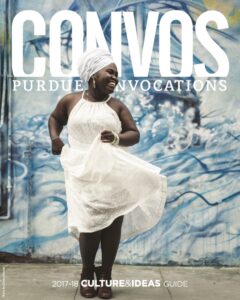